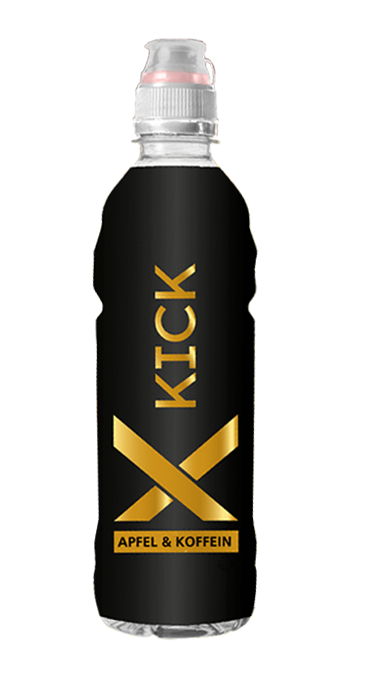 The creation of X-Kick sets new standards in the functional drinks segment. Every athlete, gamer, in fact, everyone knows the feeling:
You’re in the thick of the game, project, fight for victory or struggle to reach the finishing line and you’ve already burnt up most of your energy. You’re mentally and physically strained, maybe even a tad exhausted, but you really want that victory, that success. It doesn’t matter whether you’re fighting against your weaker self or your opponent.

Coaxing and motivation from the outside doesn’t quite give you the boost you need. You’re in the tunnel and have to work it out for yourself. Yes, you need to focus harder and be stronger than your opponent.

Your will, your vision of achieving your goal lend you strength, but your body and mind demand more. They need that decisive turbo kick to give you the X-tra boost you need to reach your goal.

X-Kick is the functional drink that picks you up and gives you just the help you need!

The story of X-Kick has its roots in professional sports.

The challenge consisted of producing an organically based, but readily available performance booster for the mind and body to overcome and invigorate during phases of exertion.

We deliberately did NOT want any artificial ingredients and unhealthy sugar bombs, as is the case with many popular drinks! That wouldn’t be conducive to achieving an athletic performance and wouldn’t have made us feel very good.

That’s why our experts worked on the recipe for around two years and tested hundreds of different active ingredient combinations until the final, highly effective product was ready, which is healthier than many other drinks on the market.

Drinking X-Kick during periods of exertion, such as during a game or competition, gives athletes the constituents they need to almost instantly get a new X-tra boost.

Healthy eating is essential. It forms the basis for performance for all athletes and people. That’ s why it is vital that the same applies to a functional drink that can act as an extended workbench for the muscles and the mind during periods of exertion.

X-Kick meets the high standards set for modern-day nutritional products because it is vegan, and it is composed of apple juice from selected apple harvests and a highly efficient natural caffeine stimulant mix.

X-Kick is free of anabolic and androgenic substances and has been tested by the Centre for Preventive Doping Research and satisfies their stringent requirements (Analytical Report AR202103155).

With every bottle of X-Kick sold, we plan to support the following charities: Common Goal, Stiftung Deutsche Sporthilfe and eSport-Bund Deutschland e.V.